If you haven’t heard by now, former Northwestern basketball player Johnnie Vassar has filed a lawsuit against Northwestern and the NCAA. Basically, the lawsuit makes two claims: 1) NU treated Vassar terribly, harassing him to leave the program and revoking his athletic scholarship on improper grounds. 2) As part of a larger class action suit against the NCAA, the transfer rules for undergraduate student-athletes are unlawful.

Because the second aspect doesn’t directly concern NU (it can’t control NCAA rules), this story focuses on the events laid out in the lawsuit pertaining to Vassar and NU. If you are a lawyer or are interested in poring over a lawsuit, here’s the real thing. But because lawsuits are pretty difficult to read, here is the story laid out by the lawsuit that you’ll actually be able to understand: 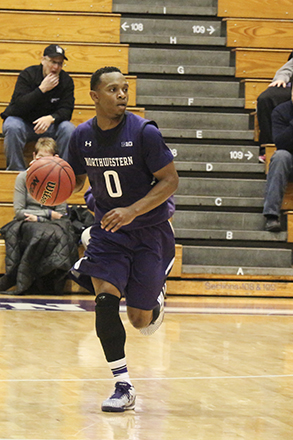 Vassar is introduced in the lawsuit as “one of the nation’s most-heavily recruited freshman,” which isn’t exactly true. Vassar was a three-star recruit and the 55th-rated point guard in the country per ESPN, a solid get for the Wildcats, but by no means a program-changing star. He was athletic, quick and had some serious bounce, which were additions to head coach Chris Collins’ team. However, as is the case with most freshmen, Vassar didn’t play much, only registering over eight minutes in a game once during the 2014-15 season.

The first allegation comes around Feb. 3, 2015, when after a loss to Nebraska in which Vassar played one minute (it’s unclear if this was directly after the game or in a later practice), Collins tore into Vassar, saying he “sucked” at basketball and didn’t do ‘shit’ on the court, and wouldn’t play again. Whether or not Collins said these things, it should be noted that many coaches – whether it’s college, high school and even lower levels – yell and say mean things to their players. It’s not particularly nice, but it’s not uncommon or illegal.

The more serious claims come in March 2015, when NU’s coaching staff supposedly made at least 16 phone calls and sent text messages to Vassar, urging him to transfer. They also contacted Vassar’s mom, and when she said it seemed like they were pressuring her son, assistant coach Armon Gates “responded along the lines that while Coach Collins wouldn’t say they were forcing Johnnie out, Gates confirmed they were in fact forcing him off of the team.”

The NCAA basketball scholarship cap is 13, meaning NU could only have 13 scholarship players on the team at one time. Scholarships are valuable, and it’s possible that NU really didn’t want Vassar taking up one of those spots. If the lawsuit’s claims are true, it’s probably the best explanation as to why NU tried so hard to get Vassar off scholarship and off the team.

Vassar still didn’t want to transfer, but he picked up a “permission to contact” form, which lets other schools contact a potential transfer. Per NCAA bylaws, this didn’t mean Vassar was withdrawing from the team, but regardless, NU removed him from the team and deleted him from the roster. Then, around March 30, 2015, NU issued a press release informing the media of Vassar’s transfer – which he allegedly never wanted to do, or signed any documents for. But Vassar did tweet this statement on March 30, 2015, which has since been deleted:

“I’ve loved my time at Northwestern University but have arrived at the very difficult point of transferring. This was incredibly challenging to announce since I will miss my team, our coaching staff, and the stellar academics NU offers. Yet I know this transition is best for me as I look forward to attending a school where I can play a more integral role on the court while I continue to excel in my studies. NU has helped me grow tremendously as a student and athlete. I know these lessons will help me advance wherever I land next. Thank you again to Coach Collins, NU’s Coaching Staff, and team for this opportunity. It’s been a great year as a Wildcat. I’ve enjoyed all the memories and time spent here!”

At this point, Vassar contacted other schools like DePaul, Georgia Tech and Utah, but because of the NCAA’s rules that undergraduate transfers must sit out a year, none of the schools wanted him. This is where the larger class action suit comes in – basically, the suit argues that if Vassar was able to play immediately, he would have transferred and everything would have been fine. But because of the NCAA transfer rules, which the suit claims violate antitrust law, Vassar was mistreated. (If you want to read more about the class action suit against NCAA transfer rules, go to page 28 No. 95, it’s fairly easy to read and very interesting).

So, because Vassar had been removed from the team, but couldn’t transfer and still wanted to play and remain at NU, the school placed him in the “Wildcat Internship Program” to retain his athletic scholarship. The program consisted of an eight-hour-per-week service requirement, and NU had Vassar report at 7 a.m. several days a week to perform these “janitorial and maintenance duties”:

“Johnnie picked up trash and leaves, operated a leaf blower, put salt on sidewalks and under cars, wiped down the outside tennis court bleachers, swept the baseball diamonds, and lift heavy metal planks near the football field (hurting his shoulder). Teammates and other students often walked by Johnnie, inquiring why he was picking up trash or working in the snow.”

Obviously, this seems pretty messed up. It’s unclear what the Wildcat Internship Program usually consists of (I can’t imagine other athletes have done this), but the lawsuit claims that NU made Vassar do these menial tasks in order to convince him to leave the program.

And this is where it starts to get really shady. Vassar reached out to Vice President for Athletics and Recreation Jim Phillips, Deputy Director of Athletics Mike Polisky and Academic Advisor Cory Harbor voicing his concerns about his treatment, but nothing changed. In fact, in November 2015, Harbor told Vassar that other positions within the program were open, but that Polisky specifically instructed Harbor not to authorize a change. 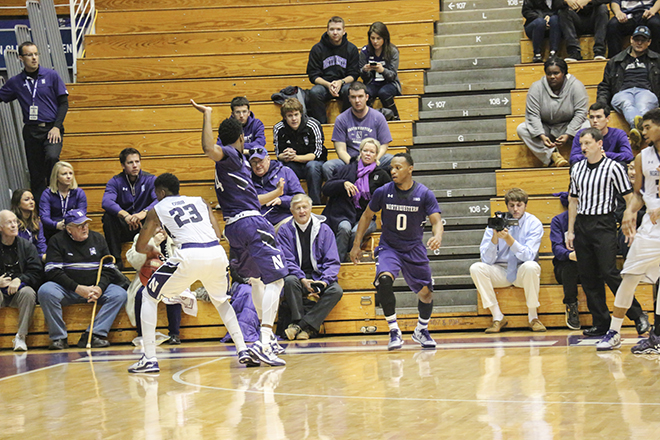 The lawsuit claims that NU then upped its efforts to make Vassar leave, as in March 2016, when NU’s Deputy General Counsel Priya Harjani “informally inquired into Johnnie’s openness to considering a cash payment equivalent to the remaining value of his athletics scholarship.” This would violate NCAA rules and end Vassar’s NCAA basketball career, which he didn’t want to do. Instead, on March 16, 2016, Harjani offered Vassar a scholarship that would keep him “covered financially the same way he currently is” and would alleviate him from his unwanted internship duties – basically, an all-expenses-paid academic scholarship.

But Vassar was dealing with the death of his father at the time, and it’s unclear what his response to Harjani was. Then, on April 8, Harjani wrote to let Vassar know that his athletic scholarship was going to be revoked, in part because of Vassar’s indication to transfer in his tweet. If Vassar signed the agreement, he would be provided with full financial aid for his final two years. Polisky even called Vassar, urging him to sign the agreement. But Vassar still didn’t, and around April 20, after a formal recommendation from the athletic department, NU cancelled his athletic scholarship. Vassar asked Polisky the exact grounds for the revocation, but Polisky wouldn’t tell him what they were.

Finally, on April 22, Vassar got an answer from Harjani: NU claimed that Vassar had regularly worked fewer than the allotted eight hours per week in his internship, and submitted fake timecards to the athletic department. Vassar had two options: 1) Accept the ruling, guaranteeing him the full academic scholarship, as long as he passed his classes and followed the rules. Or 2) Appeal the ruling, and risk losing all scholarship possibilities.

Because he was sure he didn’t fake his own timecards, Vassar appealed. On April 26, at Vassar’s appeal, NU submitted what it said was Vassar’s timecards, but were apparently forged (you can see an image of them at page 21, No. 63 in the lawsuit). Allegedly, the cards were not in Vassar’s handwriting, his name was misspelled on one of the cards and he was actually traveling on one of the days when NU’s fraudulent timecards showed him working.

The Committee concluded that the “janitorial” work Vassar had been doing was wrong, but by removing the athletic scholarship, he wouldn’t have to do it anymore because he wouldn’t be in the Wildcat Internship Program. So, they decided to remove his athletic scholarship and provide him with “the equivalent scholarship from the general Northwestern Scholarship account in the same amount as you would have received as a student athlete.”

If even some of these claims are true, NU clearly wronged Vassar, harassing him and trying to force him out of the program, presumably to free up another scholarship spot. However, these are all claims, so the truth is unclear. NU’s Vice President for University Relations Alan Cubbage fired back at the lawsuit, calling the allegations “without merit and simply inaccurate.” Collins has declined comment when asked about it.

The suit asks for money for all the damages and costs Vassar had to pay for, as well as a larger declaration that the NCAA’s transfer rules are unlawful. It’s a compelling case against the NCAA and transfer rules have been questioned in the past, but it’s difficult to imagine something akin to free agency in college athletics, where any student-athlete can simply hop to another school.

As for NU, the claims of fraudulent timecards, menial labor and harassment are very serious. For now, they are just claims, and there are some gaps in Vassar’s side of the story – it will be interesting to see how the University defends itself and what evidence it brings to the table.