Softball loses in semifinal of Big Ten Tournament, but sneaks into NCAA Tournament
By Rob Schaefer
7:29 p.m. May 15 2016 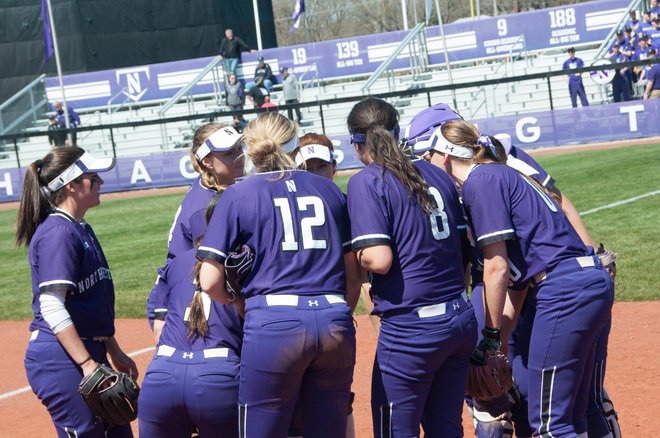 After losing in the semifinals of the Big Ten Tournament, Northwestern will have to wait and see if it makes the NCAA Tournament.

Northwestern fell to Minnesota in the semifinals of the Big Ten Tournament on Saturday, and its NCAA Tournament hopes briefly hung in the balance. But on Sunday night, it was announced that the 'Cats had secured an at-large bid to the 16th NCAA Tournament in program history, and their third in as many seasons.

The entirety of the Wildcat offense came in the opening frame, as runs batted in from Andrea Filler, Sammy Nettling and Brooke Marquez helped NU jump out to an early 3-0 advantage.

Ohio State broke through for the first and only time in the fourth inning, turning a lead-off walk by Cammi Prantl into a run off a one-out double by second-baseman Emily Clark. Amy Letourneau immediately replaced Northwestern starter Kristen Wood upon this development, and the hatches were as good as battened. Letourneau took care of the rest, finishing the contest with 3 ⅔ shut-out innings and earned her 14th win of the season for her efforts.

Saturday’s semifinal against the Minnesota Golden Gophers (41-12, 19-3 B1G), though, was a different story. It was instead the ‘Cats who saw themselves fall behind early courtesy of a Sara Groenewegen three-run home run in the top of the first inning. Wood started for NU for the second consecutive game but was yanked after just one inning. Wood allowed four runs on four hits in her inning of work.

Northwestern clawed back in the bottom of the frame, plating two runs off an RBI double from Filler and a Letourneau infield single, and rebutted a Minnesota run in the top of the second with a run of their own to keep their deficit within one, 4-3.

But reliever Letourneau was not able to clamp down the Golden Gophers the way she did the Buckeyes. Letourneau finished the game for NU, tossing six innings of four-run ball, but the Wildcat offense proved incapable of keeping up with Minnesota, falling by a score of 8-4. The Golden Gophers scored at least one run in each of the first five innings of the game.

For Minnesota, Groenewegen earned her 29th win of the season, compared to only five losses. She struck out nine Wildcats and pitched all seven innings of the game. Groenewegen went on to earn her 30th win on Sunday in a ten-inning effort, helping Minnesota upset the Michigan Wolverines (46-5, 21-2 B1G) in the final. Groenewegen was named a National Player of the Year finalist last week.

While Northwestern ends their season with a clean .500 record, a scorching 16-6 mark over their final 22 games and consistent strong showings in Big Ten play helped NU snag a bid in the NCAA Tournament. The 'Cats are in the double-elimination Athens (Georgia) Regional, where they'll start facing Oklahoma State (29-24, 6-11 Big 12) at 12 p.m. Central on Friday. The game will be broadcasted on ESPN3.