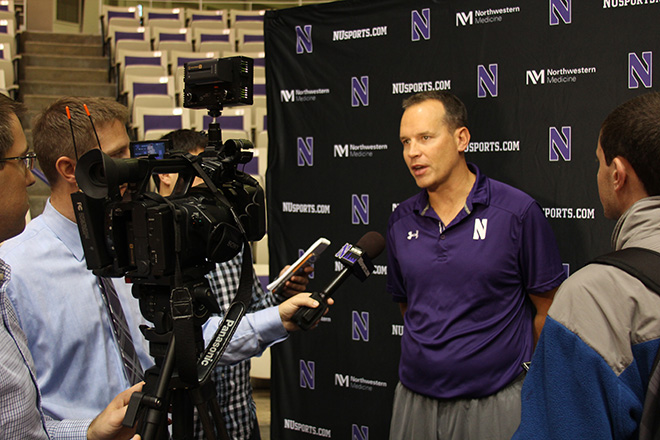 Tasked with one of the hardest jobs in college basketball – getting Northwestern, the only major conference school to never make the NCAA Tournament, over the hump – basketball Head Coach Chris Collins has gone 29-36 in his first two years at the helm of a rebuilding program. We asked Collins about the upcoming 2015-16 season, which could be a year of drastic improvement for the 'Cats.

On the off-season and gearing up for the season:

“Our guys are very anxious to start playing against some other people. Certainly for us it has been a good offseason. I thought we really maximized some of the things we needed to do. I think you’ll see a number of the guys got physically stronger. The freshmen who are now sophomores, I was really pleased with what they’ve done physically – [Bryant] McIntosh, [Scottie] Lindsey, [Vic] Law, [Gavin] Skelly – they all look older. They look like sophomores now, which is always a good thing. Our seniors have done a really good job. You have the four older guys that have been with me since my first day here – Tre [Demps], Alex [Olah], [Nathan] Taphorn, [Sanjay] Lumpkin. You can say they were recruited by a previous regime, but they’re our guys. They have been with me; they know what I expect on and off the court and that’s been nice.”

On the culture of Northwestern basketball:

“Every program talks about culture. For ours, coming into this year, our culture was in a good spot in terms of the guys being able to hold each other accountable for what I expect, day in and day out. I think those are the best teams. The best teams are the ones where the guys take care of that stuff and the coaches just have to worry about coaching and execution. If the coach has to worry about attitudes and effort and enthusiasm, then you’re taking away time from teaching and coaching. Then it is very hard to win, especially against the competition we play in our conference.”

On their summer trip to Spain:

“We had a summer trip that was outstanding for our team. A lot of guys got a chance to play. The way I approached the trip is that we wanted to win, but I started a different lineup every game. I played different guys together and everyone got pretty much equal time. So the guys could really show what they could do, out there against people that didn’t know what we were doing.”

On whether this is "The Year":

“You can’t skip any steps, you have to handle your business and what’s in front of you. I think our guys a good attitude about it. I don’t want this team to feel any kind of pressure for carrying the weight of what has or hasn’t happened in this school program’s history – it isn’t fair to them. I want them to enjoy the journey; I want them to enjoy the process. This is their moment, this is their time and we will get what we earn at the end of the year. This current team has seven months to be together. Let’s try to make the most of it. Let’s see who we can become as a team, and at the end of the day we will get what we earn. That’s how we’ve approached our offseason training and that’s how we will come into the season.”

On the roster as a whole:

“This year we have 12 scholarship players. I really feel all of them are Big Ten caliber players that can help. For me, from a day-to-day standpoint in practice, different teams win each day. There’s great competition; there’s really good depth. I think we can be a team that’s a strength in numbers type of team. We are going to have to utilize our pieces. We are going to be the kind of team that on a given night, there could be a different leading scorer. Certainly there’s going to be a lot placed on our two guards, McIntosh and Demps, and I think they are ready for that. Alex Olah has been a guy who has a lot of experience. After that, everybody has their niche on this team. For me, I have to figure out how to use what we have to our advantage.”

On offense and defense:

“I’d like to be a better defensive team this year. I thought our defensive numbers slipped last year. I thought our offense was greatly improved last year. We ran much better offense, we had more firepower, we scored the ball better, and our flow was much better. But we took steps backward defensively and we need to have greater resolve on that side of the floor. [On offense], we are a team that relies on a lot of ball movement and player movement. We are not a one-on-one team. We need to realize who we are offensively and understand we need to cut well. We need to screen well. We need to understand spacing. we need to move the ball, execute our stuff and create offense together.”

On performing better in the Big Ten:

“I think a big part of it is learning how to win close games. I thought we played better basketball last season than we did in year one, but we had that stretch last year [where we didn’t finish games]. The margin of being 6-12 vs. 12-6, to me, is winning those close games. But we didn’t get it done. There are no excuses. The way the Big Ten is, every game is going to be close. I think Maryland was 9-1 in games decided by five points or fewer – that’s the difference. Part of it is a belief, I think we get in those situations and we hope we win or we hope we don’t lose. Some teams expect to win, like a Michigan State or a Wisconsin, because of the program success. They take the floor like they’re supposed to win. A big step for us is not only having confidence, but also walking on the floor and believing we are supposed to be successful, believing we are supposed to win those games.”