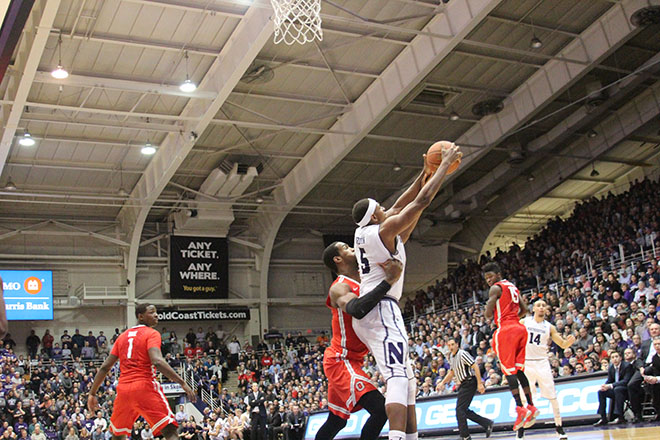 Dererk Pardon skies for one of his 14 rebounds on Wednesday night. The freshman center also tallied nine points off the bench.

For the second time in four nights, Welsh-Ryan Arena was rockin’.

Unfortunately for the Northwestern faithful, however, it was heartbreak again for the Wildcats (13-3, 1-2 B1G) on Wednesday night, as they dropped a second straight B1G contest, this time to the visiting Ohio State Buckeyes (11-5, 3-0 B1G), 65-56.

You could truly feel winter beginning to set in Evanston on Wednesday night, as the Wildcats shot a frosty 30.3 percent from the field and a frigid 15.4 percent from three-point range in the first half. Northwestern missed its first 11 attempts from behind the arc before senior guard Tre Demps knocked down the Wildcats’ first three pointer of the game with 1:51 remaining in the first half.

After the game, Northwestern coach Chris Collins said on his team’s shooting struggles, “From my vantage point, I thought we did get some clean [shots] ... And when we got open looks, we missed them, sometimes that’s how it goes.”

Despite their shooting woes, though, the Wildcats led 27-26 at halftime. After being knotted at 17 with 6:18 to play in the first half, Ohio State went on a quick 9-0 run to put them up 26-17 with just over 4 minutes until intermission. Northwestern answered with a 10-0 run to end the half, keyed by 4 points from reserve big man Gavin Skelly and three pointers from Tre Demps and Nathan Taphorn.

Demps, however, struggled throughout, finishing the night with 7 points on just 3-17 shooting.

Collins stood behind his star guard after the game, saying, “We’re not going to lose confidence in him … All really good scorers go through times where you’re not shooting as well. You just have to relax and focus on other things.”

Ohio State made continued to pressure Northwestern with multiple spurts of offense, but the Wildcats found a way to stay competitive throughout the second-half, keeping the deficit within 5 points until the Buckeyes pulled away late. Following an Aaron Falzon three to cut the Ohio State lead to 51-50 with 6:06 remaining, the Buckeyes went on a 14-3 run, successfully quieting an especially raucous Welsh-Ryan crowd in the progress.

“It was kind of a funky game,” said Collins, “we had some key breakdowns defensively late in the game, and you just can’t have those kind of breakdowns if you want to beat a good team.”

Collins specifically mentioned losing Ohio State sophomore guard Kam Williams defensively multiple times down the stretch. Williams led all scorers with 21 points and made all 5 of Ohio State’s three pointers for the game.

“I think now it’s becoming a little mental, guys are starting to question their shots," Bryant McIntosh said. "Basketball is all about repetition in shooting, so maybe we just need to get more reps in.”

Collins attributed much of his team’s offensive struggles on the absence of senior center Alex Olah, saying “Not having a guy like Alex [Olah] to be able to just drop it into the post and get some offense when things aren’t going well has really put a lot of pressure on our guards ... We have to find a way to get contributions from other guys.”

Collins called Olah “doubtful” to play in Northwestern’s next game on Saturday and said his condition would be reevaluated at the end of the week.

McIntosh led the Wildcats with 15 points on 5-for-15 shooting, including two second-half three pointers which helped keep Northwestern afloat. Freshman Dererk Pardon was again a bright spot, contributing 9 points and 14 rebounds, half of which came on the offensive glass.

Pardon said after the game, “My role with the team right now is to provide energy, back up Joey [Van Zegeren] and be a great person on the boards … And I accept it, anything to help the team win.”

Northwestern has been here before, as losing two out of three to start conference play catalyzed an eventual 10-game losing streak for the Wildcats in the 2014-15 season.

“We can’t get discouraged. The thing about this league is you have to try to avoid the extended losing streaks where you get yourself out of touch with the rest of the league,” Collins said. “We have to stop the bleeding.”

While the Wildcats will lick their wounds tonight, they can look ahead to an opportunity to get back on track Saturday, January 9, when they travel to Minneapolis to take on another conference foe: the Minnesota Golden Gophers (6-9, 0-3 B1G).