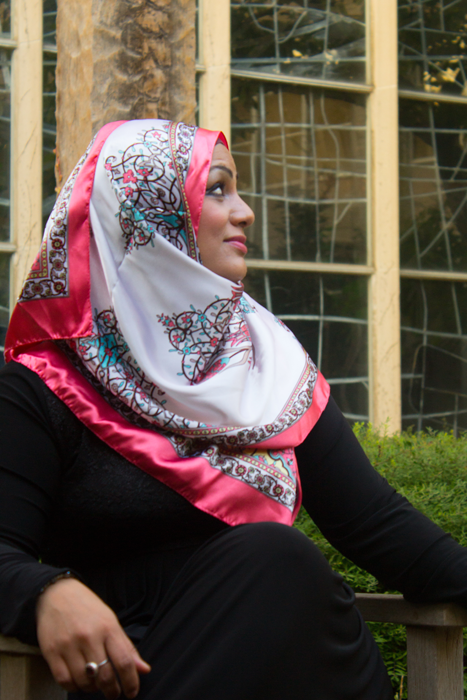 In the first weeks of class, NU Associate Chaplain Tahera Ahmad started a selfie tally. Students approached her for a quick photo to show they had met the woman who stole headlines this past summer.

Her recent claim to fame was not because of her work as one of few female Muslim chaplains or her visits to the White House. It wasn’t because of her impressive background in Islamic studies or her university interfaith initiatives. Instead, she made national news because of an Islamophobic attack against her.

In May, Ahmad asked for an unopened Diet Coke while on a United Airlines flight. The flight attendant told her no, stating that it was a security concern.

After she objected, a nearby passenger lashed out: “You Moslem, you need to shut the fuck up ... You know you would use it as a weapon.”

Ahmad took to social media and her story went viral. Her story went from a single Facebook post to a segment on Islamophobia on "The Daily Show" with Jon Stewart in one week. Thousands of #UnitedForTahera tweets rallied in her defense, while others spread bigotry. Since then, United Airlines has publicly apologized, and Ahmad has worked with them to improve diversity training for staff.

“Even if it’s a very small change in terms of United’s attitude of taking something more seriously, I think that’s a positive change,” Ahmad says.

Ahmad’s work on campus embodies this positive change. She strives to create safe spaces for students to talk and learn about faiths. Her role as chaplain encourages dialogue, education and tolerance.

“Literally anyone can come through this office: faculty, staff, students,” Ahmad says. “I provide pastoral counseling for anyone. In the last six years, I’ve definitely had more non-Muslims come through my office than Muslims.”

University chaplaincy includes everything from spiritual guidance to safe dialogue. The concept is derived from a Christian tradition but has evolved into a counseling outlet for those who ascribe to any or no faith. The National Association of College and University Chaplains reports a chaplain presence on approximately 165 campuses in the nation.

Muslim chaplaincy began in the military in the late ‘50s. From there, it spread to prisons, hospitals and universities. In the last 15 years, the number of Muslim chaplains in American universities has grown to more than 50.

Ahmad is the first full-time female Muslim chaplain employed by a single private institution. She is one of three chaplains at Northwestern and the only Muslim chaplain on campus.

“I think my role as a female Muslim chaplain is very unique, pioneering and it’s very significant,” Ahmad says. “I take this role very seriously because I know what it means for a lot of young Muslim women who are considering spiritual leadership.”

In addition to her work as an associate chaplain, Ahmad is the director of interfaith engagement and helped kick off this year’s NU Interfaith Initiative meetings in October.

Ahmad also works with Muslim life on campus through leadership and educational development. Between the Evanston, Chicago and Qatar NU campuses, Ahmad estimates there are 1,000 Muslim students at Northwestern.

Alex Nelson, a Bienen senior and student worker in the chaplain’s office, accompanied Ahmad to the Parliament of the World’s Religions conference in Salt Lake City this October. Nelson has worked with Ahmad for over two years.

“Traveling to this conference with her gave me the opportunity to see that this – educating herself and communicating with people – is what she does constantly, both on and off campus,” Nelson says.

Faith is often an uncomfortable topic in the American public, but Ahmad says the discrimination she experienced on the United Airlines flight has helped start much-needed discussions on interfaith collaboration and education.

“When Jon Stewart did his piece, a lot of young Muslim women wrote to me,” Ahmad says. “That’s when I felt I made a difference. When people started to say they were able to talk about [their religion] in a way that was productive and not awkward.”